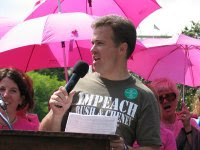 David Swanson, a well-known blogger who is active in human rights issues and who has been encouraging the U.S. government to, among other things, close the Guantanamo Bay detention facility, will be my guest on News Talk Online on Paltalk.com Wednesday January 14.

Swanson will discuss president-elect Barack Obama's pledge to close Gitmo. And whether he believes he will follow through on that promise.

The bigger question is whether Obama will reverse the United States course with regard to detainees held elsewhere around the world. And what he will do to improve the U.S. image abroad.

Paltalk is the largest multimedia interactive program on the Internet with more than 4 million unique users.

The journey to improve human rights everywhere is the responsibility of everyone. With that being said, I have sincere hopes that "gitmo" will be a thing of the past; however, I fear the recent contracts afforded Blackwater might actually bring about another type of "gitmo".

It's hard to say what the future will bring, but let's hope it brings an end to even just a percentage of the world's suffering.

Personally, I would not be offended if they closed Gitmo. Just feed the prisoners to the sharks, and then that facility wont be necessary any more.

I didn't join the ASPCT (American Society for the Prevention of Cruelty to Terrorists). The dues are a bleeding heart, the loss of concern for national security and moonbat lunacy. It's too steep a price to pay - at least for me.

But still, one does have to wonder... where, oh where does President-elect Obama plan to house these animals, criminals, terrorists - whatever.

Certainly they can't be housed in MILITARY prisons with those mean old American MP's! And while federal prison would be really nice, do you honestly think that our elite white collar federal prisoners would allow it? Don't ever forget that the creme de la creme of our prison population still has friends in VERY high cabinets.

But, if they send Momo to the state pen and Bubba makes him his bitch, as Bubba and even Billy Bob are wont to do, then wouldn't all these animals, criminals, terrorists - whatever - have to stone each other to death or something to uphold their "honor"?

Where to put them is a quandary - a real sticky wicket, I tell you!

Wait! Here's a thought - send them out to Sheriff Joe in Maricopa County. What am I thinking? Oh, the cruelty! The inhumanity of it all! No! No! Abdul in pink boxers, eating green boloney? No self-respecting animal, criminal, terrorist - whatever would do that! He'd rather 'martyr' himself!

There is only one solution. A special Adopt A Suspected or Known Terrorist And Take Him Home to YOUR Country Day at the UN.

To begin with, GITMO cannot be closed without a majority of congress voting to close it. Why? Because GITMO is a Military Base. Can they close the prison ON GITMO? Not really. Again, and for the same reason.

Just where does everyone plan on putting these inmates? Would you want one of them living next to you?